Stormquakes: a newly identified coupling of the atmosphere, ocean and solid Earth

Dr. Wenuyan Fan from the department of Earth, Ocean and Atmospheric Science at FSU and coauthors discovered a new geophysical phenomenon that they named “stormquakes”. It involves the coupling of the atmosphere-ocean and solid Earth. 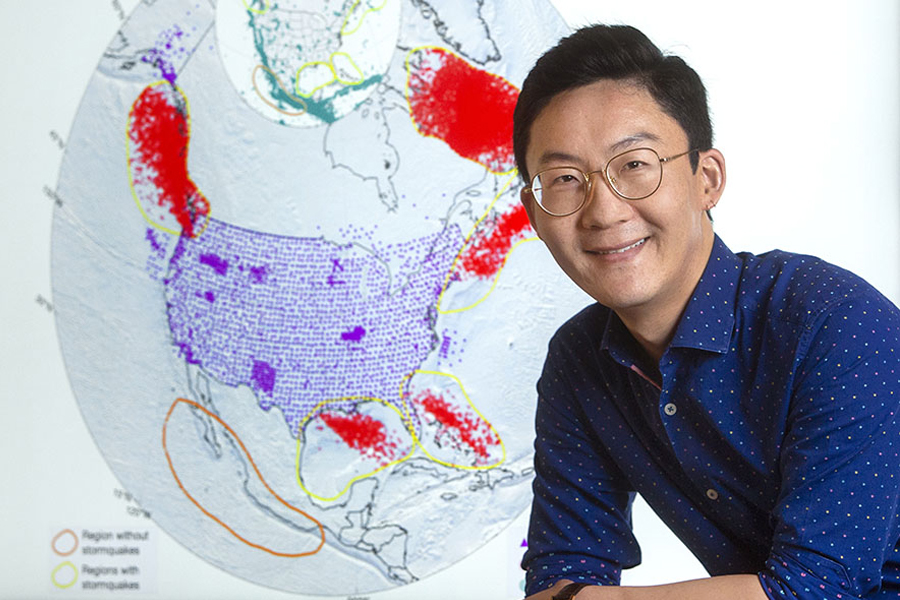 Dr. Fan and his colleagues worked on ten years of seismic records of the USArray and discovered that large storms such as hurricanes and Nor’easters can excite transient seismic signals as large as those excited by M3.5 earthquakes.

These stormquakes are fundamentally different from previously reported atmosphere-ocean-solid Earth couplings that produce incoherent seismic noises. Instead, stormquakes produce coherent transcontinental Rayleigh wave packets similar to those generated by earthquakes. They can be located as point-sources in the surface wave band and hence will allow future novel investigations of Earth structure. Stormquakes migrate along the continental shelfbreak tracking the leading edge of large storms, indicating that they have potential use in oceanography/meteorology as a remote monitoring tool, which is sensitive to wave activity on time scales of minutes.

The team of researchers have comprehensively documented the systematic features that lead to the generation of stormquakes across a decade long dataset including identifying the physical mechanism that limits their excitation to certain regions of passive continental margins creating effective point-sources.

The study comprehensively reported the phenomena and provided a plausible physical mechanism.

Their research is published in the journal Geophysical Research Letter: https://agupubs.onlinelibrary.wiley.com/doi/abs/10.1029/2019GL084217

The research covered by the Incorporated Research Institution for Seismology (IRIS), HERE