Last January, Anxhelo Agastra, meteorology student for the department of Earth, Ocean and Atmospheric Science at FSU got a poster awarded at the 19th American Meteorological Society Annual Student Conference in Boston. 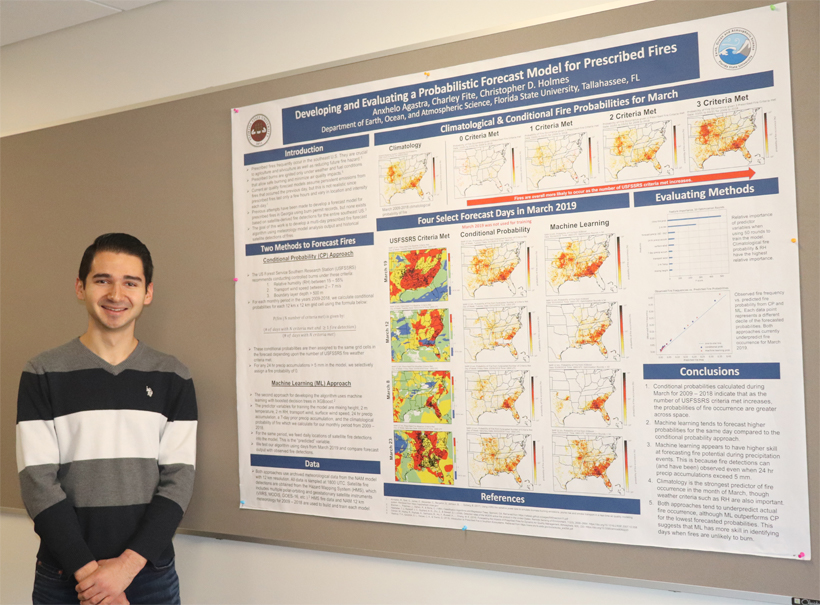 Anxhelo Agastra with the poster presented at the AMS annual meeting: Developing and evaluating a probabilistic forecast model for prescribed fires

Anxhelo’s research topic was developing a model to forecast where prescribed fires are likely occur on a given day in the southeast U.S.
He conducted the research with Charley Fite, FSU-EOAS meteorology graduate student. They both work with FSU-EOAS meteorology professor Dr.Holmes’ research group: the Atmospheric Chemistry and Global Change Research Group.
Anxhelo, Charles and Professor Holmes built this model with a machine learning approach. This research has a lot of practical value in the realm of air quality and air quality forecasting. Specifically, current forecasts of air quality do a poor job of representing smoke emissions from prescribed burns because there is currently no method for predicting these burns.

“Having a workable model in place to predict these burns in advance could vastly improve the way we forecast the nature of the air we breathe. Air quality has an enormous impact on people’s health, motivating the need for this research.” Says Anxhelo.

He was awarded a $100 monetary award based on the feedback he received from judges who visited his poster. 11 undergraduate and 4 graduate students were selected for awards at this year’s poster session.

“Anxhelo’s research has shown that we can predict where fires will be lit across the eastern United States, including Florida, several days in advance.
He’s able to do this by combining weather forecasts with historical satellite data on where and when these fires burn. Nearly all of these are prescribed fires that are used for clearing agricultural waste or reducing wildfire hazards by removing forest debris. While reducing wildfire hazard is good, the smoke it creates can be harmful for sensitive groups. This kind of fire forecasting has not been done before, we think it’s going to help improve air quality forecasts and better alert sensitive people when smoke is coming.” Professor Holmes said.

Anxhelo started doing research for Holmes in the spring of his junior year after taking his first class with Holmes the fall before. He was applying to participate in some Research Experiences for Undergraduates programs when Holmes asked him if I would be interested in working on research in his group and participating in the NASA-NOAA FIREX-AQ project during summer.

“I was very lucky to be able to participate in FIREX-AQ. The project to predict prescribed fire locations basically started out of motivation from this campaign, since we needed a way to forecast in advance where fires would likely be burning for flight operations. From there the project has progressed into so much more and has the potential to vastly improve forecasts of air quality in the southeast U.S.” Anxhelo says. 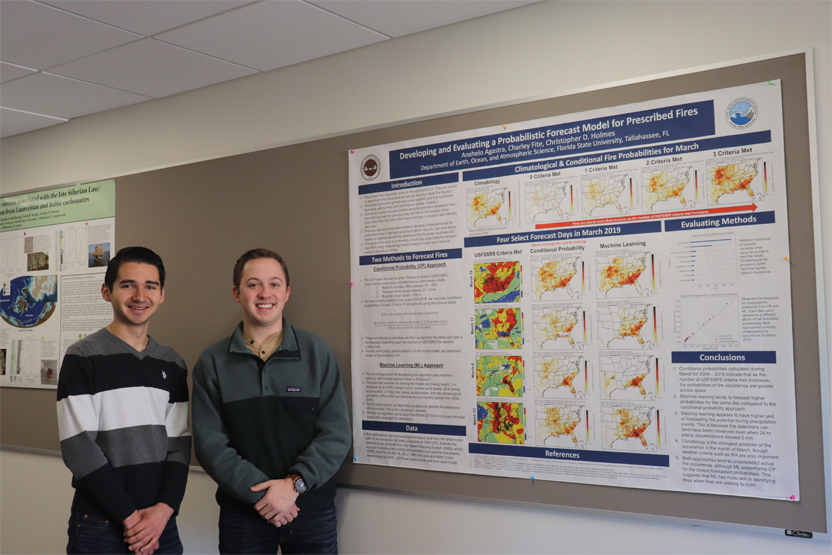 Charley Fite wanted to work under Dr. Holmes was because of his interests in air pollution. Back when Charley was an undergraduate, he had a couple of NASA internship opportunities: he got to collect atmospheric chemistry data on an aircraft during one, and do research related to wildfire smoke plumes during the other. Those experiences and knowing that Holmes was getting involved in the NASA-NOAA FIREX-AQ aircraft campaign to study smoke from fires – by flying through the plumes are what helped inform Charley’s decision to come to FSU for graduate school.

“The field-campaign and this current research of Anxhelo and I on prescribed fire predictability are components that are contributing to the research I am doing as a part of my NASA FINESST fellowship. This grant will support study on how well we can better simulate emissions of prescribed fires in atmospheric chemistry models.” Says Charley.