“I realize that many of you did not know Steve Kish well, so I will attempt to offer my personal perspective. He received his BS degree from this department (Geology) in 1969 and then returned here to graduate school, finishing his Masters degree in 1974. While an undergraduate and graduate student at FSU, Steve became a lifelong close friend of Bill Maxwell, whom some of you know as a distinguished alum and major EOAS donor. He was in Bill and Mary Beth’s wedding. A few weeks before his death, Bill and I visited Steve in his hospital room. Steve brightened up when he heard Bill’s voice that day. Having an old friend by his side was a rare treat for him at that point in his suffering.

I came to know Steve in the early to mid 70’s at professional meetings when he was doing Argon (K/Ar dating studies), Rb/Sr, and U/Pb mass spectrometry at FSU, and later at the University of North Carolina. In 1983, he received his PhD from UNC. Although I had left that institution over a decade earlier, I kept up with him over the years while he was there through mutual acquaintances. We hired Steve as an assistant professor here at FSU in 1984, so as an undergraduate and graduate student and then as a faculty member, Steve served this institution for 45 years. He loved FSU and he loved being a part of it for 60% of his life. While we were all enjoying our new digs in the EOAS building, Steve was confined to a hospital bed for 3 months. Carraway was thus his only home here for 45 years. His days there would routinely last for 12 hours or more.

I knew Steve to be a careful and thorough scientist. He was a literal encyclopedia of geologic knowledge, and as such, was a valuable member of the department for both students and faculty alike. He was also probably the most humble faculty member that I have ever known. I never ever heard him brag about his exploits, although he certainly could have. He was also among the most scientifically versatile faculty members that I have known here. This came from his genuine love of all aspects of Nature and the Earth, and from his voracious reading on a very broad spectrum of subjects. Because of this, as a graduate advisor and committee member, Steve’s service was invaluable. His interests and expertise ranged from geochemistry and geochronology, to economic geology, to GPS and conventional surveying, field hydrology instrumentation, and instrumentation for hydrological modeling.

The life of faculty academicians is indeed a rather strange one. At most institutions we are expected to perform at a high level in every endeavor. Yet it is the nature of our jobs that we are rarely credited by colleagues, students or administrators for performing well. That is what is expected of us. Yes, fortunately it does happen on occasion. I may be as guilty in this regard as others. I probably rarely thanked all of my teachers nearly enough who made a difference in my life. I now wish I had done better. The same goes for colleagues. When we appreciate each other, we should make an effort to communicate that appreciation. Steve was a significant asset to my career here at FSU, and to that of many students as well. I realize now too late that I never thanked him enough. What most of us learn to do is to internalize the fact that we are doing well at what we are trying to do. For most of us, the good opinions of others is not the driving force behind our failed pursuits of perfection. Allow me a quote from the great Native American actor, Chief Dan George, from the movie “The outlaw, Josey Wales.” “Indians vow to endeavor to persevere.” As professors, some of us vow to endeavor to persevere! For his whole career, Steve Kish “vowed to endeavor to persevere,” and he did so courageously until the end of his struggle. He is one who never got the credit that he deserved for all that he did. He struggled with that fact for many years, but continued on his path of doing his best regardless.

Those of us who knew Steve well, including many far beyond the walls of FSU, will miss him greatly,” Jim Tull FSU-EOAS geology professor. 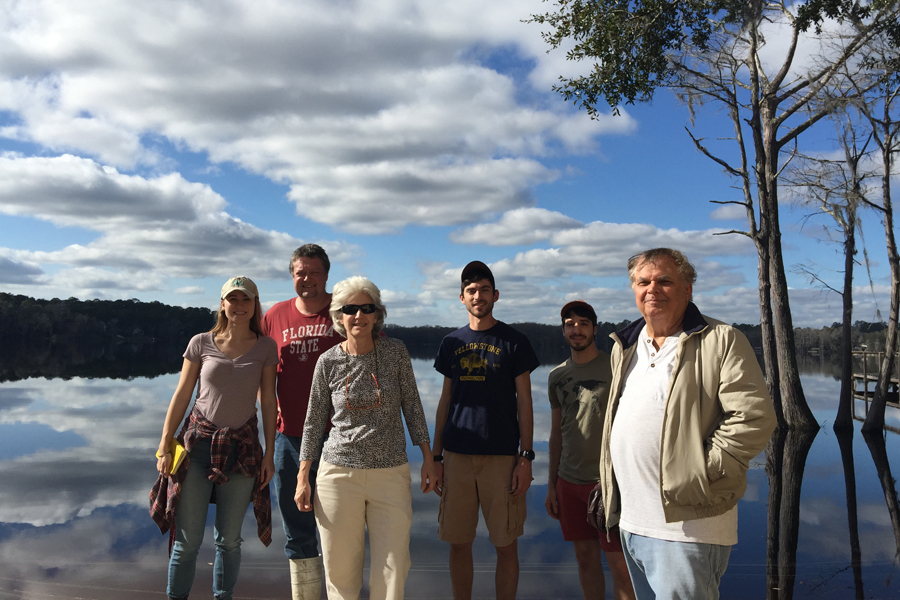 Professor Stephen Kish and his group of students during a field trip- Picture credits: Ming Ye