The Department of Earth Ocean and Atmospheric Science offers advanced degrees in Geological Sciences at both M.S. and Ph.D. levels. The M.S. is a professional degree. It is expected that students graduating with a M.S. degree in Geological Sciences will have acquired the capability and skills to competently evaluate and pursue graduate level research and will also possess a sufficiently broad background in the science for a professional career. The program of study for the M.S. includes formal course work in several areas within Geological Sciences, and a thesis project. Although an M.S. thesis is less comprehensive than a Ph.D. dissertation, it is complete in the sense that it is well-grounded in the scientific style of thinking and method, contains a clear defensible hypothesis, and involves a rigorous method of analysis. Successful completion of the M.S. program involves a significant commitment of time and energy, and a level of understanding, that goes well beyond the expectations of the baccalaureate degree.

A student usually enters the doctoral program in Geology with a degree in a basic science and should have substantial undergraduate/masters work in at least one of the following or related field: geology, chemistry, or physics. Applicants for graduate study will select an area of specialization in geology based on their undergraduate/masters work.

**Prior to submitting an application it is strongly encouraged to contact faculty members with related research interests.** Students are admitted by a vote of the Geology Graduate Admissions Committee.

University deadlines may differ. Please refer to the FSU Office of Graduate Admissions for University deadlines. You are advised to submit your application and supporting materials at least three months in advance of the semester you wish to enter. You may apply later than these department guidelines, but there are less likely to be openings available. 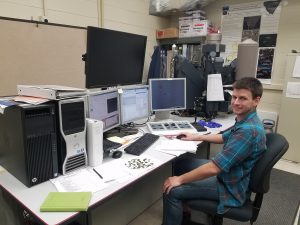 Aaron Ashley is a PhD student at FSU-EOAS department in the Geology field.

In general, he is working on understanding the roles of volatiles, namely water and CO2, in geologic processes.

The research Aaron plans to conduct for his PhD focuses on constraining the physical characteristics of fluids and magmas in subduction zones.

“These fluids and magmas are critical for the volcanism that is characteristic of island arcs, but they are also important for transporting volatiles into the deep Earth and/or out through arc volcanism. I plan to study these materials using theoretical modeling and high pressure and temperature experiments at FSU.” Aaron says.

Before studying for his Master degree, Aaron worked on a couple different rock projects:

One of them involved ooid ironstones (sedimentary rocks) from Alabama, in which he used chemical, mineralogic and textural evidence to constrain their ambiguous origins.

Ironstones may be in part formed by bacterial processes, and he worked to identify those potential processes.

A whole rock ironstone and a set of different photomicrographs of ooids within the ironstones.

Over a different project, Aaron focused on metamorphosed gabbros (igneous rocks from the oceanic crust) from Georgia, on which he constrained their metamorphic history using similar techniques.

Metagabbro rock and photomicrograph of a metamorphic corona at about 2.5 x magnification on a petrographic microscope. The entire corona width is about a few mm large.

During his Master’s, Aaron worked to constrain the distribution of water and the processes affecting it in the uppermost mantle, or the lithosphere.

He did this by examining rocks from the lithosphere, called peridotite xenoliths, for their major and trace element chemistries, and hydrogen contents (which are by convention expressed in concentrations of H2O, or water).

Peridotites are first partially melted at mid-ocean ridges, which deplete them in various elements like hydrogen, but they are also often re-enriched in these elements through chemical and mineralogic interactions with melts or fluids, like those in subduction zones.

The samples Aaron examined were also metamorphosed in that they showed signs of strain and recrystallization. Thus, it was critical to understand the geological histories of the samples to understand the processes that likely influenced their water concentrations.

Along his research and years of studies, Aaron has worked around the Rock Cycle with samples from the three main groups: igneous rocks, metamorphic rocks and sedimentary rocks.

“From sedimentary ironstones I worked my way to metamorphic (but originally igneous!) gabbros, to other igneous (but also metamorphic!) peridotites, and now to the fluids and melts that provide some igneous rocks for subsequent metamorphism, weathering or re-melting.” 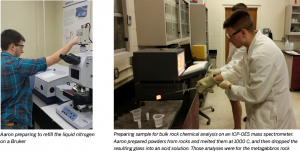 The research on rocks is part of Geological Sciences, Earth’s history and its evolution.

“Nothing is lost, everything transformed” – Antoine Lavoisier, French chemist, 1780.